For Eurostar inclusive packages on this date please call as we have access to more seat availability offline. Please call 0330 880 5001 or Email The Spice Building, 8 Devonshire Square, London, EC2M 4PL

To celebrate Walt Disney World Resort’s 50th Anniversary, the resort is welcoming guests to ‘The World’s Most Magical Celebration.’ The 18-month event beginning on 1st October 2021, ushers in a spectacular array of new attractions, EARidescent décor, nighttime spectaculars and much more. Please see below for some of the magical highlight moments that the fantastic 50th anniversary celebration has in store for guests! 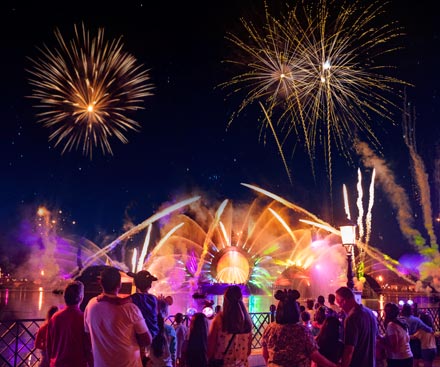 One of the largest nighttime spectaculars ever created for a Disney Theme Park, “Harmonious” takes guests on a thrilling journey through new interpretations of classic Disney songs as they’ve never been heard before, inspired and influenced by cultures and people from around the world. The music plays amid choreographed moving fountains and lights, lasers, fireworks and other pyrotechnics bursting spectacularly above and around World Showcase Lagoon. 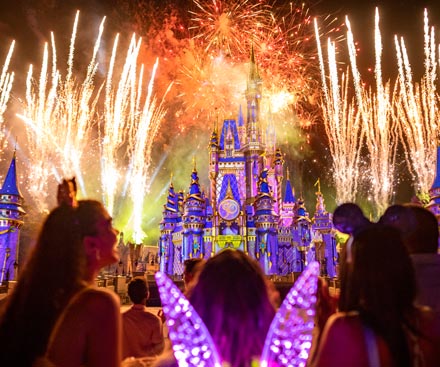 Guests are invited to join dreamers like Princess Tiana from “The Princess and the Frog,” Miguel from Disney.Pixar’s “Coco,” Rapunzel from “Tangled” and more as they set out on a journey beyond the ordinary to a magic land filled with adventure, wonder, empowerment and enchantment. The breathtaking spectacle will feature Disney music, stunning fireworks, enhanced lighting and immersive projection effects that extend for the first time from Cinderella Castle down Main Street, U.S.A. 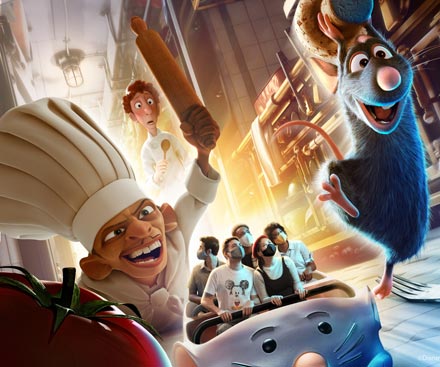 Found at EPCOT, the brand-new family-friendly attraction invites guests into the flavourful world of Disney.Pixar’s Academy Award®-winning film “Ratatouille”, feeling as if they have shrunk down and are scurrying through Gusteau’s famous restaurant. In this 4D ride experience, join Chef Remy on a daring culinary caper that will captivate all your senses as you zip, dash and scurry through the bustling kitchen, dining room and walls of Gusteau’s famous Paris restaurant. C’est magnifique! 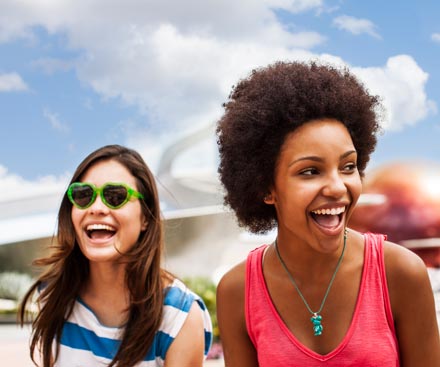 The new restaurant in World Discovery at EPCOT is a culinary experience offering the celestial panorama of a space station, including virtual daytime and nighttime views of Earth from 220 miles above the planet’s surface. Guests board a space elevator for a simulated journey to the Centauri Space Station, where they experience the “height of dining.” Once they arrive, guests enjoy meals and drinks while taking in views that are truly out of this world. 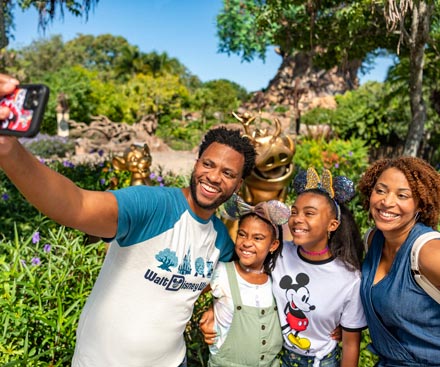 “Disney Fab 50 Character Collection” golden sculptures are spread across the four Walt Disney World Theme Parks. Fifty characters are featured in total, including Miguel and Dante from Disney.Pixar’s “Coco” at EPCOT and Simba, Timon and Pumba from “The Lion King” at Disney’s Animal Kingdom Theme Park.

During the 50th Anniversary celebration, icons at Walt Disney World Theme Parks transform at night into magnificent Beacons of Magic, coming to life with their own EARidescent glow. Cinderella Castle illuminates Magic Kingdom Park with a dazzling radiance and pixie- dust. At Disney’s Animal Kingdom Theme Park, a warm light emanates from the Tree of Life as fireflies gather to usher in the magic of nature. The Hollywood Tower Hotel at Disney’s Hollywood Studios is awash in a brilliance evoking the golden age of imagination, and at EPCOT, new lights shine across the reflective panels of Spaceship Earth, connecting to one another like stars in a nighttime sky. 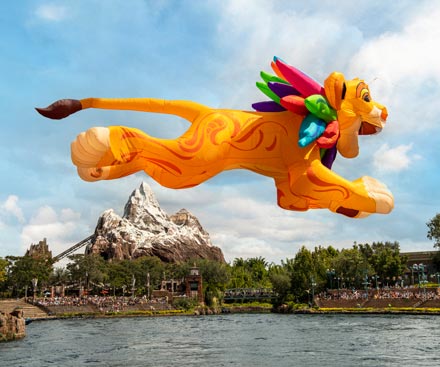 New daytime entertainment is stirring at Disney’s Animal Kingdom Theme Park, as “Disney KiteTails” comes alive several times daily at the Discovery River Theatre. A vibrant experience for the whole family, guests can experience performers fly windcatchers and kites of all shapes and sizes, while out on the water elaborate three-dimensional kites – some stretching to 30 feet long – depicting Disney animal friends, including Simba, Zazu, Baloo and King Louie. 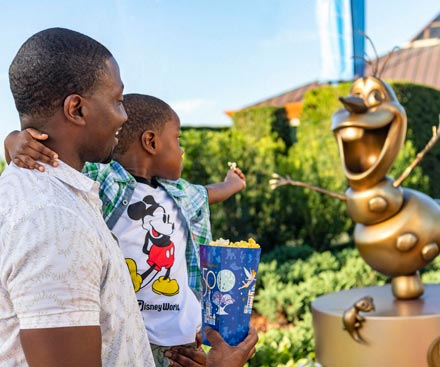 The magic is calling all Foodies to the Walt Disney World Resort 50th Anniversary Celebration. Throughout the four Theme Parks and beyond, Disney chefs and mixologists have created more than 150 sips and bites full of colour, whimsy, and a touch of EARidescent shimmer, including Cheese Fries with Walt’s Chili at Disney’s Animal Kingdom Theme Park, Mission to Mars burger at Cosmic Ray’s Starlight Café in Magic Kingdom Park, EARidescent Croissant Doughnut at EPCOT, EARidescent Ice Dream Cone at Disney’s Blizzard Beach Water Park and Magical Beacon Cocktail, found at many table-service restaurants, lounges and pool bars at Walt Disney World. 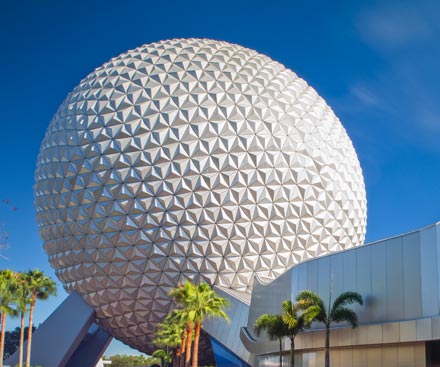 Launching in 2022, Guardians of the Galaxy: Cosmic Rewind will be the first “other-world” showcase pavilion at EPCOT. The family-friendly adventure starts in the Galaxarium, a planetarium-like exhibition that explores the similarities and mysteries of the formation of Earth’s galaxy and Xandar. Guests will learn more about the treasures Xandar has to share – until the moment when the Guardians of the Galaxy arrive, and guests go on an intergalactic chase through space and time. The attraction will feature a new innovation from Walt Disney Imagineering – a storytelling coaster that rotates 360 degrees to focus guests on the action, including the first reverse launch on a Disney coaster. 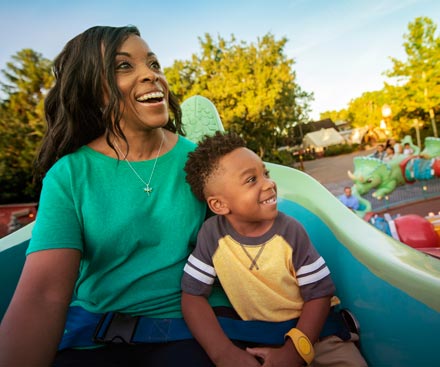 The next-generation MagicBand+ will retain those popular features and add new functionality to unlock experiential moments of magic throughout the Walt Disney World theme parks and resorts. After a guest enters a theme park, MagicBand+ will come alive at various times with colour-changing lights, haptic vibrations and gesture recognition, enhancing the environment’s immersive storytelling. The wearable will allow guests to engage with favourite Disney moments in new ways and discover new interactive experiences. 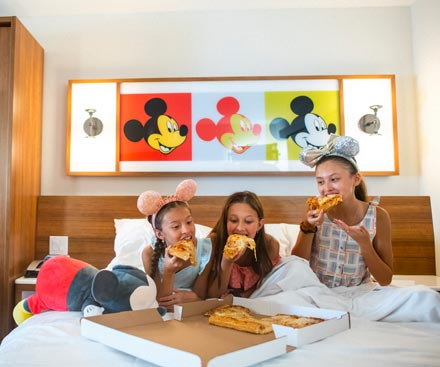 Disney is creating its own custom voice assistant using Alexa technology for supported Amazon Echo devices. Called “Hey Disney!”, this voice assistant will work alongside Alexa to respond to vocal prompts, bringing Disney Characters and stories to life in magical new ways to make guest stays more convenient, engaging and enjoyable. “Hey Disney!” will begin rolling out in Disney Resort Hotel guest rooms across Walt Disney World in 2022 as part of the destination’s 18-month 50th Anniversary Celebration. Access will be offered as an optional, complimentary feature during guest stays. “Hey Disney!” will make the services Alexa users know and love – weather forecasts, timers, alarms, etc. – magical with the help of popular characters such as Mickey Mouse, Olaf, C-3PO and many more.

Why book with MagicBreaks?